The state of the UK

Taste be thanked, I'm neither attracted to black women, not to overlarge chests in general... makes me immune to that kind of crap
Embrace the Darkness, it needs a hug 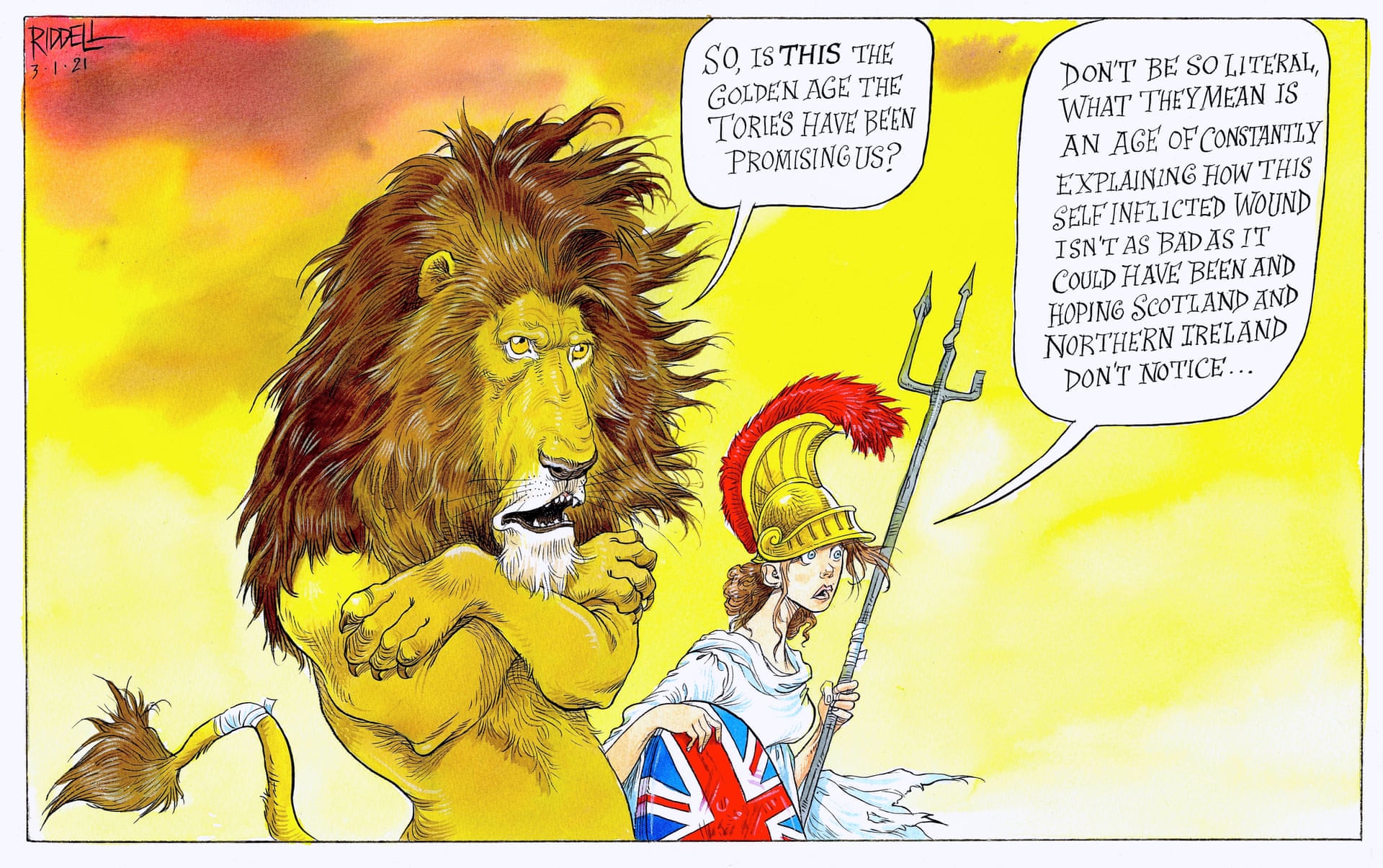 Depressingly prescient.
Rationalia relies on voluntary donations. There is no obligation of course, but if you value this place and want to see it continue please consider making a small donation towards the forum's running costs.
Details on how to do that can be found here.
.

Embrace the Darkness, it needs a hug

A plan to slash universal credit will have the biggest impact in the poorest towns in England, the government has been warned, after it emerged that claims for the payment have increased far more in the most deprived areas during the Covid pandemic.

The research by Bright Blue, a liberal Conservative thinktank, will heap further pressure on Rishi Sunak, the chancellor, to extend a £20-a-week increase in universal credit introduced last March. It is set to be withdrawn in April and many Tory MPs are privately worried that the cut will undermine Boris Johnson’s pledge to “level up” the country, and are pushing for the increase to be made permanent.

London boroughs saw an average 8.3 percentage-point increase in those of working age claiming universal credit in the first eight months of the pandemic. The average increase across all other English local authorities was 6.3% percentage points. Local authorities outside London that had seen the biggest increases included coastal towns and post-industrial communities such as Blackpool, Middlesbrough and Hull.

At least 14 Conservative MPs, including several ministers, cabinet minister Michael Gove and a number of prominent Tory commentators joined Parler, the social media platform favoured by the far right that was forced offline last week for hosting threats of violence and racist slurs.

Parler was taken offline after Amazon Web Services pulled the plug last Sunday, saying violent posts and racist threats connected to the recent attack on the US Capitol violated its terms.

Analysts from the London-based Institute for Strategic Dialogue (ISD) said that Parler had become a platform where the ideas of mainstream Conservative MPs coalesced with those of extremists.

Milo Comerford, senior policy manager at ISD, said: “By positioning themselves as a safe haven for free speech and an alternative to the alleged ‘liberal bias’ of social media giants such as Facebook and Twitter, platforms like Parler attracted a motley crew of ultra-libertarians, violent extremists and conspiracy theorists, as well as more mainstream ‘free speech fundamentalists.’”

At least nine of the Tory MPs on Parler joined the platform in an apparent show of support for free speech following Donald Trump’s clashes with Twitter over remarks he made following the death of George Floyd in Minnesota last year.

Other Tory MPs to join Parler on the same day as Hopkins include Mark Jenkinson, who last year alleged that food parcels were sold or traded for drugs in his Cumbrian constituency without offering any proof, and trade minister Ranil Jayawardena.

Oh see how the Tories now run from Donald Trump


Stewart Lee wrote:No 10 might be cutting the cord with the US president, but memories of this sycophantic liaison will stain the record book

In 2019, Jeremy Hunt, who once hid behind a tree to avoid the press on the way to a party, said politicians boycotting Donald Trump’s state visit were exhibiting “virtue signalling of the worst kind”. Was Hunt also virtue signalling last week, then, when he conceded that Trump “shames American democracy”? Or have the goalposts, already too narrow for even the slender Hunt to hide behind convincingly, moved?

Trump himself once called our prime minister, Boris Turds Johnson, “Britain Trump”, with characteristically unpunctuated precision. In the light of Trump’s inevitable immolation of American democracy, Turds’s handlers now seek to distance our prime minister from his admirer, every white supremacist’s favourite reality TV host. Last week, the Times ran an article, headlined “Johnson is not Trump’s transatlantic twin”, by the Spectator’s James Forsyth, whose wife, Allegra Stratton, is Downing Street’s press secretary and whose principles are above question. Once the journal of record, it seems the Times is now the journal of whatever Downing Street’s press secretary wants the record to say. And there are efforts afoot to rewrite that record.

But our politicians’ historic fondness for President Exploding Tangerine Hitler will be harder to forget. There’s no need to deploy the deep fake technology or distorting social media of the Tories’ last election campaign to find a photo of America’s self-styled Mr Brexit posing in his Liberace’s lavatory lift with a clearly engorged Nigel Farage and his Ukip, Breitbart and Leave.EU colleagues. It’s there as plain as the nostrils on Michael Gove’s nose. But Farage’s friends weren’t alone in bending Trump’s brain farts to their own agendas and appeasing his own special brand of home-fried fascism.

In January 2017, a delighted Michael Gove became the first British journalist to visit the “warm and charismatic” new American president. Gove was even accompanied by Rupert Murdoch, a fact he chose to hide in his subsequent BBC interview and newspaper article, where he propagated Trump’s Nato lies unchecked. Gove described ascending the phallocratic Trump Tower in a golden lift, “operated by an immensely dignified African American attendant kitted out in frock coat and white gloves. It was as though the Great Glass Elevator from Charlie and the Chocolate Factory had been restyled by Donatella Versace, then staffed by the casting director for Gone With the Wind.” Charlie and the smooth glass surfaces, working as a team!

Turds got off to a better start than Gove in his approach to Trump, declaring in 2015 that the pussy-grabbing humanity-tumour was “clearly out of his mind” and a man of “quite stupefying ignorance that makes him, frankly, unfit to hold the office of president of the United States”. Back then, Turds, who has no actual discernible values beyond steamy ambition and refrigerated cowardice, was mayor of London. And Mayor Turds was playing to the focaccia gallery of the Trump-loathing London liberal elite, who fell one by one for his cheeky Have I Got News For You persona like a succession of statues of slavers in a Bristol dock. Once Trump was president, Turds simply tried on a new opinion, discarding the conviction-filled prophylactic of his spaffed beliefs like the condoms he obviously never wears.

It really is pathetic how England protects itself. They will not learn.

Thousands of England’s vital flood defences were in such a state of ruin last year they would fail to protect communities from extreme weather, an investigation has found.

More than 3,400 of England’s “high consequence” flood assets, defined as those where there is a high risk to life and property if they fail, were judged by the Environment Agency to be in such a bad condition they were almost useless.

This means that more than one in 20 of the country’s crucial flood defences were in disrepair in 2019-20, the highest proportion in years. This rose to nearly one in 10 in the regions battered by Storm Christoph last week.

The findings comes from Environment Agency data obtained by Unearthed, the investigative arm of Greenpeace UK, and shared with the Guardian. Doug Parr, the chief scientist and policy director at Greenpeace UK, said: “The poor state of so many critical flood defences in England is putting thousands of people and homes at risk. This is unacceptable.”

Most of Britain was placed under a weather warning for snow and ice on Monday after an Arctic blast of cold air hampered the recovery effort from Storm Christoph, which caused at least 600 homes to be flooded as two months’ worth of rain fell in 48 hours in some areas.

British ministers and officials have approved the sale of arms to nearly four-fifths of countries subject to arms embargos, trade sanctions or other restrictions over the past five years, according to analysis.

The UK has exported military hardware to 58 countries of the 73 listed as subject to restrictions by the Department for International Trade (DIT), including sniper rifles to Pakistan, assault rifles to Kenya and naval equipment to China.

The exports are legal but researchers with the group that compiled the report, Action on Armed Violence, said they represented “a systemic failure to consider the human rights record of states before exporting weapons to them”.

Countries covered by sanctions range from a handful where all arms sales are banned to a larger group covered by transit controls, where a special licence is required, for political, security or human rights reasons.

Five countries listed by the trade department as key export markets for British arms makers: Bahrain, Bangladesh, Colombia, Egypt and Saudi Arabia, also feature on the Foreign Office’s latest list of 30 “human rights priority countries”, although not all are subject to sanctions.

How are the riots going?
I call bullshit - Alfred E Einstein
Top