The lunatic has a cross around his neck ffs.

(sorry, Hermit, couldn't help myself...)
Nurse, where the fuck's my cardigan?
And my gin!
Top

The lunatic has a cross around his neck ffs.

He's been wearing a cross like that for years in his advertisements. Maybe this was posted here before?

'If Trump Doesn’t Keep You Up All Night, MyPillow Will'


Look, this would be a better story if the pillows were good. That would be complicated, and maybe confronting such an inconvenient truth would yield some kind of worthwhile insight about the nature of man and how we can tolerate evil in exchange for comfort. I don’t know if it comes through, but that’s sort of what I’m going for here, generally, in my work as Washington correspondent for New York Magazine. I take no pleasure at all in reporting that these pillows are just as bad as you would assume they are.

It’s not just that they’re hard. They’re lumpy. Like piñatas filled with fist-size cotton balls and packing peanuts. I placed my MyPillow receipt and instruction manual on my desk, mostly as a reminder to eventually write this story, and for days I’d find myself walking over to stare at the paperwork to confirm that these really were MyPillows and not some kind of knockoff produced by a left-wing James O’Keefe–style troll (but that’s a free idea if anyone wants it).

By the second night, my boyfriend had apparently forgotten about our conversation of the night before. “What is this?” he said, poking at the pillow. “It’s like a sack of potatoes.”

But by the second week, the novelty had worn off, and he had grown less understanding of my experiment (which, unbeknownst to him, I had planned to extend over the course of one month). “No, we’re not doing this tonight!” he said, pointing at the MyPillow as if it were an enemy soldier. “It’s like we’re the Flintstones! Every single night I have to live like Fred Flintstone! And why?”

During a Judge Jeanine commercial break a few nights later, the very sight of Lindell inspired fury. “Oh my fucking God! Give me the remote,” he said. “I feel like that guy has lowered the quality of my life so much.” Muttering to himself, he added, “That guy should be arrested.” (At the rate Lindell is going, he may be! On Monday, Dominion Voting Systems officials threatened to sue Lindell for spreading “misinformation” about the integrity of the election that Trump lost.) 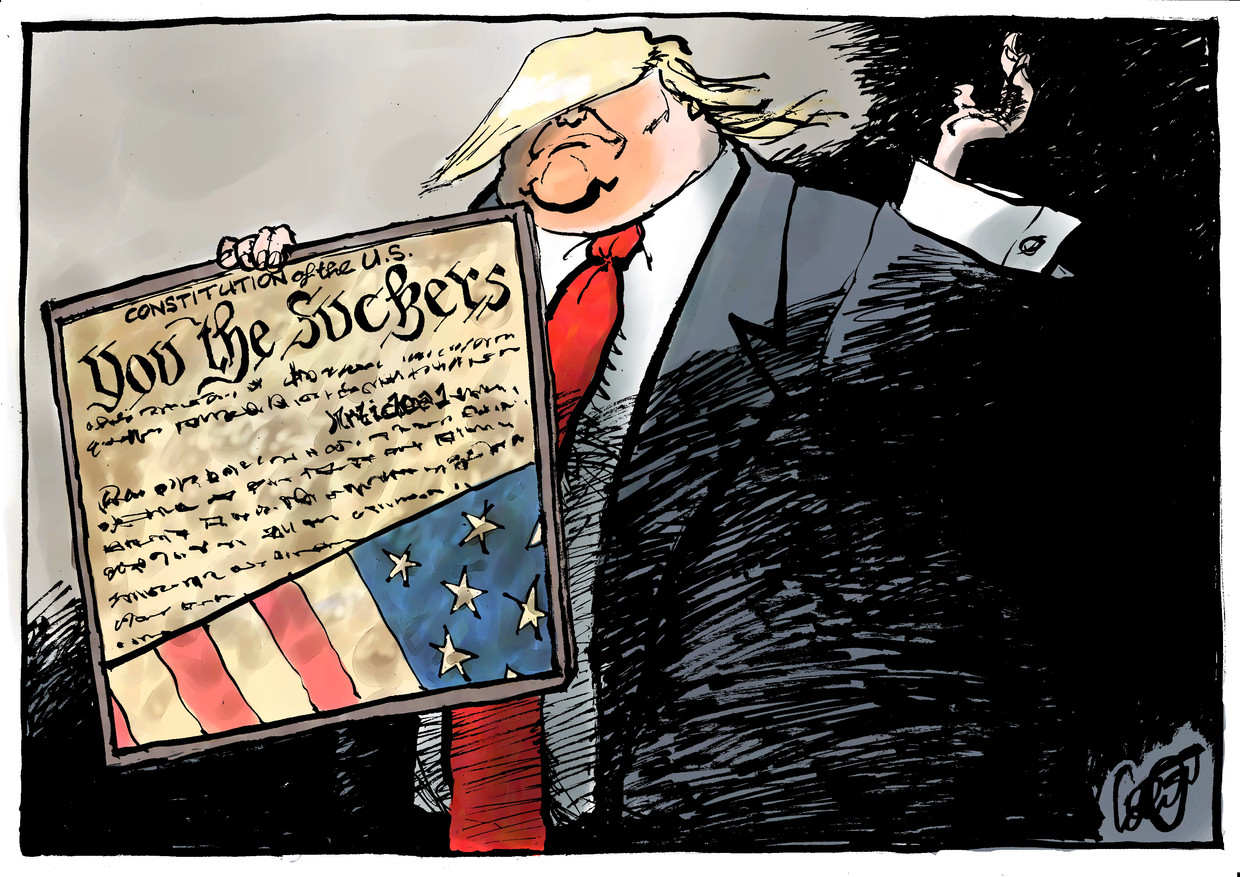 always curious about those that thinking pissing upstream of the drinking water is okay.

and then voting for subsidies to do so.

Enough people voted for this birdbrain to send her to Congress.


Rep. Marjorie Taylor Greene (R-GA) thinks a group of Satanic pedophiles running the government is more likely than a school shooting. At least, that’s what a 2018 Facebook comment from the now-congresswoman, uncovered by Media Matters on Tuesday, seems to imply. “I am told that Nancy Pelosi tells Hillary Clinton several times a month that ‘we need another school shooting’ in order to persuade the public to want strict gun control,’” Greene wrote. In another post, Greene implied the shooting at Marjory Stoneman Douglas High School in Florida, which killed 17 people, was also orchestrated. Greene has a history of pushing crackpot theories, most notably the aforementioned QAnon conspiracy, as well as similarly unfounded theories that President Obama is secretly a Muslim and that no plane struck the Pentagon on 9/11. Most recently, she was suspended from Twitter for 12 hours for sharing lies about the 2020 election in Georgia.

Oh, she's a firebrand. Ignorant loudmouth shitheels are the order of the day for a significant percentage of Republican voters. She's going to give Louie Gohmert some serious competition, and will likely reap some financial benefit.


Rep. Marjorie Taylor Greene announced on Thursday that she has filed articles of impeachment against President Joe Biden.

According to a press release posted to Twitter by Greene, the impeachment articles are for Biden's "corrupt actions involving his quid pro quo in Ukraine and his abuse of power by allowing his son, Hunter Biden, to siphon off cash from America's greatest enemies Russia and China."

"President Joe Biden is unfit to hold the office of the Presidency. His pattern of abuse of power as President [Barack] Obama's Vice President is lengthy and disturbing," Greene wrote in the statement. "President Biden is even on tape admitting to a quid pro quo with the Ukrainian government threatening to withhold $1,000,000,000 in foreign aid if they did not do his bidding. President Biden residing in the White House is a threat to national security and he must be immediately impeached."

Shortly after her announcement, David Corn of Mother Jones posted a tweet showing Greene fundraising off of her effort to impeach Biden.

"Please - join my effort to impeach Joe Biden and donate at least $45 today," Greene wrote according to the screenshot of her fundraiser. "I am fighting for you in Congress, and I need your help to ensure we can stop the criminal Biden enterprise before it's too late."

The historical fact that Biden's actions were carried out in pursuit of US government policy appears to have eluded her grasp.
Top 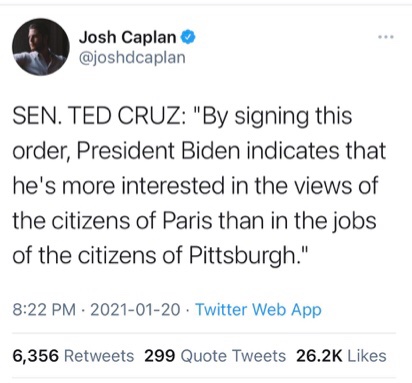 Isn't this the guy who just tried to disenfranchise the citizens of Pittsburgh?
"Two things are infinite: the universe and human stupidity; and I'm not sure about the universe." - Albert Einstein
"as far as strong, i am hard as a rock and tough as a nail. no one will bring me down. no one. i am the debonator. the tnt. and jesus has my back door pal!" - D. C. Bockemehl
"If you vote for idiots, idiots will run the country." - Dr. Kori Schake
Top

“Chuck Schumer is the majority leader and he should be treated like majority leader. We can get shit done around here and we ought to be focused on getting stuff done,” said Sen. Jon Tester (D-Mont.). “If we don’t, the inmates are going to be running this ship.”

It’s the story of Trump’s presidency.

What’s the difference between Democrats and Republicans?

Republicans, in fact, were among his worst political enemies for the length of his entire presidency. Remember his starting days, when he had a Republican-controlled Senate, a Republican-controlled House, and Republicans refused to work to pass his agenda, forcing him to turn to executive orders, instead? When Trump refused to back down and bow down and do the elitist political thing and work with the globalists, his Republican enemies changed tactics and simply quieted down a bit. They worked with the president; actually, they pretended to work with the president.

As it now shows, as it’s now proven with the 10 “off with his head” pro-impeachment, anti-Trump Republicans — they simply pretended to work with the president, biding their time, waiting their days, to take revenge.

These Republicans were the pigs.

They were the pigs in power working with their human counterparts in the Democratic Party, pigs who could not accept how someone like Trump — ugh! — could possibly get elected, never mind lead the country. They were pigs in power who thought they knew better than Trump and the American people, and of late, 75 million American voters, so they resisted his agenda, both openly and behind the scenes, but more often, quietly because of concerns about midterm elections and Trump-supporting voters.

The sneakiness is no longer needed.

“Leader Schumer and Leader McConnell had a substantive meeting and made progress on the issues of quickly confirming President-elect [Joe] Biden’s nominees and conducting a fair impeachment trial,” a Schumer spokesperson said in a statement reported by Fox on the eve of Biden’s inauguration. “On an organizing resolution, Leader Schumer expressed that the fairest, most reasonable and easiest path forward is to adopt the 2001 bipartisan agreement without extraneous chances from either side.”

It’s a power-sharing promise between the two parties.

Just what conservatives want: Republicans cooperating with the socialists and globalists. And that statement came after McConnell threw Trump under the bus and blamed him for the violence in Congress on the cusp of the electoral vote count.

It’s one thing for Trump to be stabbed by Democrats. That’s expected. It’s another for Republicans to get their last licks, to make their final bloody stabs.

• Cheryl Chumley can be reached at cchumley@washingtontimes.com

Republicans are suggesting that the voice which intrudes at 1:16:30 is Hunter Biden's.
?t=4584
Shit, Piss, Cock, Cunt, Motherfucker, Cocksucker and Tits.
-various artists
I don't want to forget this enlightening quote by our prestigious and sage member...


Biden's call for unity is thoughtful and specific. The speech made clear that for him, "unity" isn't about everyone agreeing. We don't compromise with white supremacists, after all; we simply seek to defeat them. Unity is a value that finds itself in opposition to an ideology like white supremacy. And Biden is sounding a rallying cry for the United States to unite behind this value.

It's notable then, that many conservatives took this call as a direct attack. But that doesn't really say much about Biden or his speech. It tells us a lot about them. They're the type of people who hear denunciations of white supremacy and nativism and feel personally attacked. They're implicitly putting themselves in opposition to Biden's call for unity against bigotry.

The most charitable interpretation of this position is that they just don't see nativism or white supremacy as serious threats in the United States, and so they interpret a politician's words denouncing them as being a smokescreen for attacking others. But that's not really a great defense, because it means they're ignorant, at best, of serious threats in the country, threats that affect others. And it suggests they have no interest in uniting to combat these forces, which is a damning indictment in itself.