The Thread of Democrats

Pelosi was 'aunt-by-marriage' to Newsom for 12 years or so. Funny he didn't learn more from her. Maybe they weren't close...
Shit, Piss, Cock, Cunt, Motherfucker, Cocksucker and Tits.
-various artists
I don't want to forget this enlightening quote by our prestigious and sage member...

Same old crap about Democrats havingbto talk nice to uneducated people. And nothing can be done (a few months of ads on TV has no permanent effect) about them getting conned by the trumps and Jim Jordans of the world:

...deliverables and tangibles to offer,” said Axelrod on the Hacks on Tap podcast. “It’s about changing an attitude that basically thinks of these folks as something less.

I know we're all excited now because we've taken the Senate --barely. But I can't be the only one dreading the lack of any progress and having no one but Democrats to blame.

What will they manage to accomplish?
Do not be alarmed, I'm popping a gender reveal cannon.
Top

Didn't they have it all for awhile during the Obama years?

They will probably do at least as well this time.
Shit, Piss, Cock, Cunt, Motherfucker, Cocksucker and Tits.
-various artists
I don't want to forget this enlightening quote by our prestigious and sage member...

Do not be alarmed, I'm popping a gender reveal cannon.
Top

The question of getting anything done in the legislature is thorny, but not insurmountable. Mitch McConnell's desk piled with bills that have been put there to die is no more. That will make a difference, even if it's still going to be a struggle to get anything through. However, there's another obstacle that is at least as significant as a congeries of fractious Trump lick-spittles. That would be the US Supreme Court Senator McConnell has adroitly filled with right-wing ideologues.

Some hack at Slate has been thinking about how it might be possible to force progressive changes past them. It's some arcane legislative hardball, which unfortunately leaves the current Democratic Party out. Admittedly they're beginning to show some signs of having a backbone. But they're so used to playing nice while the Republican Party puts repellent mooks like Jim Jordan and Ron Johnson in position to knee them in the nuts, I don't know if they can break the habit. Perhaps President Biden's team could consider something along these lines for executive orders.

'How Democrats Can Keep Their Policies Safe From This Supreme Court'


The most optimistic way to consider our current national predicament might be to look back at the calamity of the Great Depression, which led to the New Deal. Then, as now, a reactionary federal government struggled to handle a national emergency that exposed deep social and economic injustices permeating society. That story ended well. The disarray led to the election of FDR, who seized the opportunity to enact a transformative economic agenda including Social Security, labor protections, massive stimulus spending, and banking and monetary reform. We ended up with a radically more just society.

We can now dare to hope for the same today. Against all odds, an ideologically reinvigorated Democratic Party has won the House, Senate, and presidency. Democrats have the opportunity to finally deliver long-overdue reforms to address structural economic inequality, provide every American with adequate health care, and take aggressive action to save our environment before it is too late.

But Minority Leader Mitch McConnell has left Democrats with one big problem: the courts. Even before the death of Justice Ruth Bader Ginsburg, there was little chance that the conservative judiciary would let this dream come to pass.

Progressives are not blind to the threat of a reactionary Supreme Court. That's why discussions of court packing and other kinds of court reform were briefly front and center before the election. That momentum has stalled with the realization that 50 Senate seats just aren’t enough for the knockdown, drag-out fight that such a move would require. But there's another way to stop the court from totally derailing progressive economic reform that Democrats can use right now, one that no one is talking about.

Democrats could deploy a new legislative tactic that has never been tried before: They can include "clearly constitutional" precautionary backup provisions in progressive legislation that would automatically take effect if the primary policies in the bill are invalidated. The backup provisions would usually involve extreme, but undeniably constitutional, policies designed to achieve the same original goals as the preferred policy. This will either force the court to lay off of progressive programs, or enable progressive policy aims to be achieved even if it intervenes.

What's the role of the courts here? Why will they be having a say in progressive policy enaction?
Sent from my penis using wankertalk.
"The Western world is fucking awesome because of mostly white men" - DaveDodo007.
"Socialized medicine is just exactly as morally defensible as gassing and cooking Jews" - Seth. Yes, he really did say that..
"Seth you are a boon to this community" - Cunt.
"My penis is VERY small" - Cunt.
Top

There's a lot of harking back to the New Deal in the commentary and analysis atm. I guess it's interesting to note the obvious and ready parallels from 90 years ago, when an aristocrat president betrayed his class and reshaped the economy to defeat rising domestic fascism, but I fear that model was of its time and a new New Deal isn't going to cut it today. To date the US treasury has eased a stupendous quantity of value into the economy (I wonder how much in the last year alone compared to the New Deal?) and what have American's got to show for it? It certainly hasn't gone on the contemporary equivalent of electrifying the South, rebuilding every school in the land, or damming the mighty Colorado for power.

They will probably do at least as well this time.

It is what in the cold North, you know as a Filly Buster.
I call bullshit - Alfred E Einstein
Top

pErvinalia wrote: ↑
Thu Jan 28, 2021 7:56 am
What's the role of the courts here? Why will they be having a say in progressive policy enaction?

All it takes is somebody to bring suit claiming that this or that provision of a policy, or even the entire policy itself is invalid under the current laws. Just as the ACA ('Obamacare') was challenged and partly torn down in the courts. The Republicans haven't given up on that effort, and would take the same tack for anything from Biden and the Democratic-controlled Congress that goes against their preferred approach.
Top 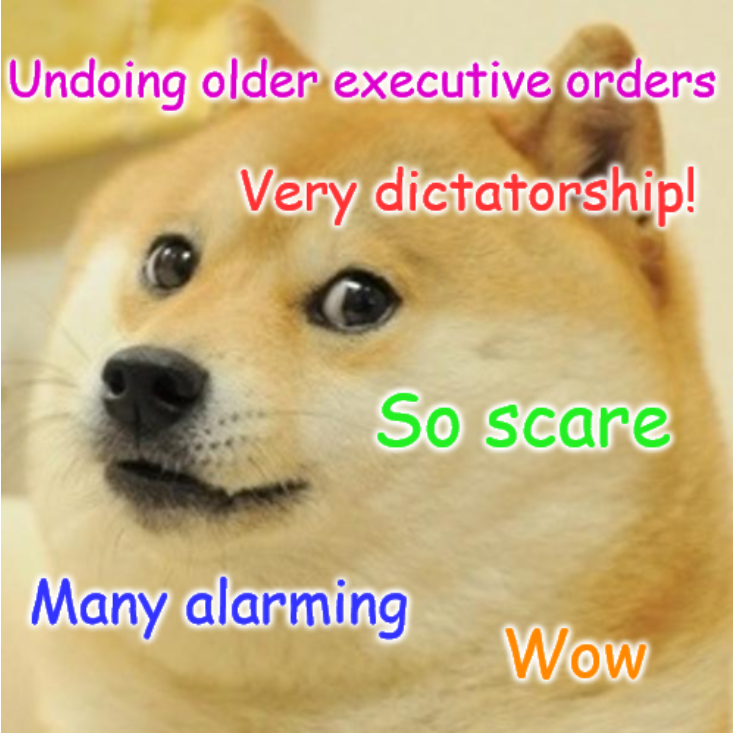 I don't always get memes. I can't tell if you are celebrating Biden, or executive action in general. Or if it is the echoe's of 'Orange-Man-Bad'.
Shit, Piss, Cock, Cunt, Motherfucker, Cocksucker and Tits.
-various artists
I don't want to forget this enlightening quote by our prestigious and sage member...