The US Healthcare Mass Debate


Australia does it pretty well.

At least in comparison to the US. Healthcare is free to those on low incomes or pensions (via bulk billing or a healthcare card), and for most others is subsidised. Public hospital treatment is free. You can also take out health insurance and go private if you wish, so we haven't gone all Marxist on freedom of choice, either...

Doesn't sound like free universal healthcare for all, though. I thought that's what Joe said was needed.


Where did I say that?

No, that was JimC. I can understand your mistake, as we are both intelligent, articulate, and handsome gents, who set the ladies a swoon, but he's the Strayan gin connoisseur, and I'm the whisky drinking southerner in Cowboyland, USA, and all that complimentary stuff really only applies to him.

There's no such thing as free healthcare, though some funding schemes are better than others.

This I know. Hospitals cost money. Doctors need to be paid. You have multi-million dollar buildings, with pieces of equipment costing hundreds of thousands of dollars, with doctors whose training cost hundreds of thousands of dollars, and nurses and other specialists and assistants... It's going to cost money. That's why I have to kind of look on in amazement when someone says "oh, your system sucks! People have to pay money for it!" And, then they explain their glorious system as involving hundreds of dollars a month in premiums, with subsidies for the poor and loans for those who don't qualify for subsidies, and then they say that's what we should do, when our system was lambasted when we had (a) free healthcare for low income, elderly, disabled and children, and (b) available health insurance premiums that were less expensive than what, say, Dutchy, says he has to pay in the Netherlands now.

A few years ago, when I could go online and get a decent health insurance plan for $150 per month for a single person, that was not acceptable to the pro Obamacare folks and the Europeans were saying "that's ridiculous, you need universal healthcare." Now a single person needs to pay more like $450 a months, and everyone is like "whew! Good thing we have Obamacare guaranteeing health insurance for all!"

Well, Forty Two, I've been screwed by Obamacare and saved by it, so I'm far less willing to take my experience, which is unusual, as indicative of anything. You should probably do likewise and accept that policy changes as sweeping as the ACA will have winners and losers. Given that we are in a situation where half of our politicians are trying to kill the damn thing and the other half preserve it, reaching any conclusion is probably premature.
"Two things are infinite: the universe and human stupidity; and I'm not sure about the universe." - Albert Einstein
"as far as strong, i am hard as a rock and tough as a nail. no one will bring me down. no one. i am the debonator. the tnt. and jesus has my back door pal!" - D. C. Bockemehl
"If you vote for idiots, idiots will run the country." - Dr. Kori Schake
Top

I don't care whose it is, it does suck, but this post of yours is a pathetic load of bullshit. If that's what you thought it was, why the fuck would you have supported it ever?

UHC is a pipe dream, and another load of horse shit.

What works is a voluntary, market driven health care system, with a solid social safety net for those who cannot afford insurance.

Once again, one of the lies of Obamacare was that it was meant to cover the poor. It wasn't. The poor were already covered, and if what was needed was to raise the income level eligible for assistance, then that could have been done -- raise that level 10%? 20%? But, no - that wasn't the purpose. The reason Obamacare had to be structured the way it was, was quite simply - and indisputably - it's in reasonable dispute - it's a "consensus" if you will - quite simply most of the "uninsured" could afford it, but chose not to buy it. I've posted endless sources for that. The Obama administrations own numbers bore that out.

I remember coaxing you into posting some of the sources for your claims, and the numbers in them didn't add up to what you claimed. I recall asking you to share where you got your numbers and never getting a response. This was maybe 5 months ago.

Perhaps it's a good time to revisit the basis for your assertions about the uninsured again. Then we can judge the reasonableness of your conclusion.
"Two things are infinite: the universe and human stupidity; and I'm not sure about the universe." - Albert Einstein
"as far as strong, i am hard as a rock and tough as a nail. no one will bring me down. no one. i am the debonator. the tnt. and jesus has my back door pal!" - D. C. Bockemehl
"If you vote for idiots, idiots will run the country." - Dr. Kori Schake
Top

Isn't that about the same amount as was uninsured before OC? And isn't it illegal to be uninsured now?
Sent from my penis using wankertalk.
"The Western world is fucking awesome because of mostly white men" - DaveDodo007.
"Socialized medicine is just exactly as morally defensible as gassing and cooking Jews" - Seth. Yes, he really did say that..
"Seth you are a boon to this community" - Cunt.
"My penis is VERY small" - Cunt.
Top

They got rid of the penalties for not being insured, so while it might be technically illegal there's no way to enforce it.
Yeah well that's just, like, your opinion, man.
Top

pErvinalia wrote: ↑
Fri Dec 21, 2018 4:00 am
Isn't that about the same amount as was uninsured before OC? And isn't it illegal to be uninsured now?

It went down after the ACA kicked in. According to the census report, Health Insurance in the United States: 2013, 41.9 million were uninsured in 2013. The 2017 report has a graph showing the trend. 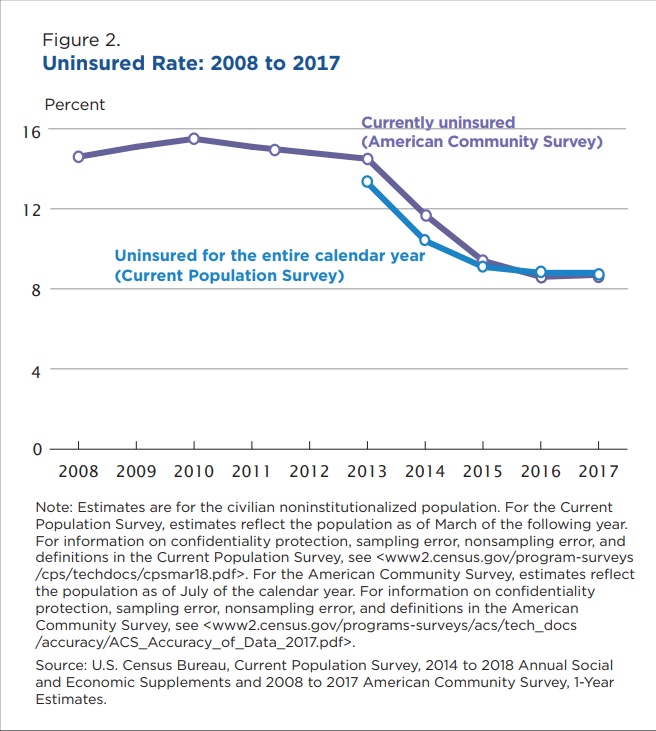 But like the Forbes article Lak linked to points out, they changed their methodology in 2013, so it's not certain how much of the drop is a result of that.
"Two things are infinite: the universe and human stupidity; and I'm not sure about the universe." - Albert Einstein
"as far as strong, i am hard as a rock and tough as a nail. no one will bring me down. no one. i am the debonator. the tnt. and jesus has my back door pal!" - D. C. Bockemehl
"If you vote for idiots, idiots will run the country." - Dr. Kori Schake
Top

Hermit wrote:Now hear this: Don't bother typing up your usual wall of words in reply. I will stop reading at the first sign of bullshit or Gish gallop.

Just put him on ignore.

No. As I mentioned numerous times already, I disagree with almost every assertion Coito Two makes, and his arguments are in my opinion more often than not based on untenable assumptions, but they are way more intelligently and coherently argued than yours, let alone than those of our participant posting from the vicinity of Yellowknife.

In short, if I started populating my ignore list, Coito Two would not be the first cab off the rank.

Untenable assumptions, like that the US is a Milton Friedman-esque libertarian wonderland?

It's all relative, so compared to civilised nations the US is definitely Milton Friedmanesque libertarian. I can guarantee that were he alive today and compared the US health care system, be it pre or post Affordable Care Act, with that of Australia, to pick just one example, he would agree. Though some Australians choose to take out private health insurance policies, most don't. Most of the expense is covered by a 2% Medicare levy that is added to whatever your marginal tax rate happens to be. High income earners ($90k+ p.a. for single taxpayers, $180k+ p.a. for couples) get whacked with an additional 1.5% surcharge. Low income earners get a rebate or pay no levy at all, depending on just how little they earn. Every time we foolishly vote the conservatives into office, they whiteant the health system by introducing co-payments, deleting some prescription drugs from the list of covered pharmaceuticals and so on, but on the whole nobody in Australia is in danger of being bankrupted by medical bills - not even the unfortunates that suffer notoriously expensive chronic illnesses like diabetes or operations that simply are expensive like quadruple heart bypass surgery.
So you talk about mobs and the working classes as if they were the question. You've got that eternal idiotic idea that if anarchy came it would come from the poor. Why should it? The poor have been rebels, but they have never been anarchists; they have more interest than anyone else in there being some decent government. The poor man really has a stake in the country. The rich man hasn't; he can go away to New Guinea in a yacht. The poor have sometimes objected to being governed badly; the rich have always objected to being governed at all. Aristocrats were always anarchists. - G.K. Chesterton
Top

The state has removed more than 16,000 low-income adults for failing to log at least 80 hours of work, job training, volunteering or similar activity — including 4,655 in November.

Some of the people thrown off the program describe a nightmarish, confusing experience with clunky technology and no one to help them. Individuals who don't adhere to the new rules for three months get removed from Medicaid for the rest of the year.

The Trump administration is quietly devising a plan bypassing Congress to give block grants to states for Medicaid, achieving a longstanding conservative dream of reining in spending on the health care safety net for the poor.

Three administration sources say the Trump administration is drawing up guidelines on what could be a major overhaul of Medicaid in some states. Instead of the traditional open-ended entitlement, states would get spending limits, along with more flexibility to run the low-income health program that serves nearly 75 million Americans, from poor children, to disabled people, to impoverished seniors in nursing homes.


‘Duck Dynasty’ Star Phil Robertson: I Don’t Need Health Care Because I Have ‘Immortality Given to Me by God’
Robertson told Fox Business Network that publicly funded health care is useless because he will live forever in God's embrace.

I already have health care. It’s given to me by God. Eternal health care. I’m guaranteed to be raised from the dead. I have life and immortality given to me by God through Jesus Christ... The temporary reprieve is not worth it. I'm telling [Kamala Harris], I have eternal health care, and it's free! Doctors can give you a little temporary reprieve, but they cannot save you from physical death. The doctors who treat you, they die, too.
https://www.thedailybeast.com/duck-dyna ... -me-by-god

"His primary rules were: never allow the public to cool off; never admit a fault or wrong; never concede that there may be some good in your enemy; never leave room for alternatives; never accept blame; concentrate on one enemy at a time and blame him for everything that goes wrong; people will believe a big lie sooner than a little one; and if you repeat it frequently enough people will sooner or later believe it." —From the OSS’s psychological profile of Adolf Hitler
Top

Users browsing this forum: No registered users and 4 guests