All Things Trump: Is it over yet?

Calls mount for investigation of possible surveillance on Marie Yovanovitch

Former diplomats and congressional Democrats have responded with fury to revelations that associates of Donald Trump’s lawyer may have carried out surveillance on the US ambassador to Ukraine.

There was also considerable anger at the silence of the state department after the House intelligence committee released WhatsApp messages on Tuesday evening between the Florida businessman Lev Parnas and a Trump donor, Robert Hyde – who both have links to Rudy Giuliani, the president’s personal attorney and all-purpose fixer who has been a central figure in Trump’s impeachment.

In the texts, Hyde, who is a Republican congressional candidate in Connecticut, implies he was in touch with people in Ukraine who were monitoring the movements and communications of Marie Yovanovitch, the ambassador to Kyiv who Trump ordered removed from her post in April. He also hinted he could arrange for Yovanovitch to be removed for the right price.

The two men then exchanged a string of messages about the ambassador’s whereabouts.

“She under heavy protection outside Kiev,” Hyde wrote to Parnas, adding two days later: “They are moving her tomorrow.”

“The guys over there asked me what I would like to do and what is in it for them,” wrote Hyde, who has posted pictures of himself with Trump and Giuliani on social media. “She’s talked to three people. Her phone is off. Computer is off. She’s next to the embassy. Not in the embassy.”

“They are willing to help if you/we would like a price,” said Hyde.

“Guess you can do anything in Ukraine with money … what I was told,” Hyde wrote in another text, to which, Parnas responded: “LOL.”

John Herbst, who was ambassador to Kyiv before Yovanovitch, cautioned that it was not clear whether the implied surveillance actually happened or was an idle boast.

It's not illegal to surveil nasty women.
Sent from my penis using wankertalk.
"The Western world is fucking awesome because of mostly white men" - DaveDodo007.
"Socialized medicine is just exactly as morally defensible as gassing and cooking Jews" - Seth. Yes, he really did say that..
"Seth you are a boon to this community" - Cunt.
"My penis is VERY small" - Cunt.
Top

It is still totally surreal that this man is actually president. I will never get used to this.

Yeah but the stock market!

Trump sought investigations from Ukraine into his political opponents while withholding vital security assistance and a White House meeting Ukrainian President Volodymyr Zelensky desperately wanted. Concerns over his dealings with Ukraine led to his impeachment on charges of abuse of power and obstruction of Congress.

Parnas spoke with MSNBC's Rachel Maddow in an explosive interview that aired Wednesday, just one day after the House Intelligence Committee released a trove of documents containing text messages and handwritten notes detailing Parnas' intricate role in the pressure campaign.

Here are Parnas' most explosive claims from his interview with Maddow: 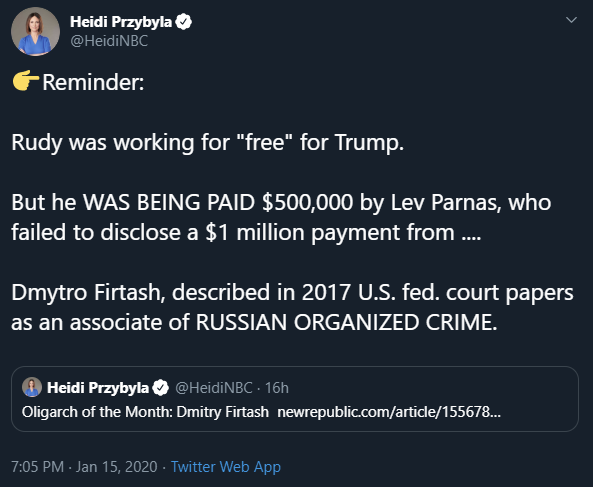 
"Holy shit, Mary. You're stacked!" —Donald Trump, upon seeing his niece Mary in a swimsuit.
Top

Tero wrote: ↑
Wed Jan 15, 2020 11:36 pm
Trump collected all these tariffs on Chinese goods. Tariffs are income. So why hasn't Trump built his wall with that?

The Democrats are to blame.

There have been previous instances in the US when those who've made a career out of advancing the interests of a particular industrial sector are then put in charge of regulating that sector. A predictable pattern is followed. It's unlikely that there will ever be a law that provides genuine restrictions on the practice, but I think there should be.


Former lobbying and legal clients of Interior Secretary David Bernhardt have spent nearly $30 million lobbying the federal government since the start of the Trump administration. This spending, documented in a Public Citizen analysis of Bernhardt’s recusals and lobbying records, underscores the extraordinarily close ties between the Interior Department and corporate interests during the Trump era.

Even in a cabinet full of corporate cronies, the pervasive conflicts of interest at the Interior Department under Bernhardt and his predecessor Ryan Zinke stand out. Bernhardt’s conflicts are so extensive that he has been labeled a “walking conflict of interest.” Public Citizen has filed two ethics complaints in 2017 and 2019 against Bernhardt, as have other ethics watchdogs and environmental groups.

Under federal conflict of interest law (18 U.S.C. 208), officers of the executive branch must avoid taking official actions for one year that impact their financial interests. The Office of Government Ethics (OGE) has defined “financial interests” to include the financial interests of immediate former employers and clients. However, OGE views the conflict of interest statute very narrowly when it comes to affecting former employers or clients. Officials must excuse themselves from a “particular matter involving specific parties” such as contracts, grants, licenses, investigations or litigation only if it is likely to affect primarily a former employer or client rather than an industry or class of persons as a whole. This definition of a conflict of interest is often toothless, as it does not cover far broader areas such as rulemaking, legislation, or general policymaking, such as an industrywide rules or policies that benefit a former employer or client. Separately, President Trump’s ethics Executive Order prohibits appointees from taking official actions in any matter that is directly and substantially related to their former employers or clients and bars federal appointees from overseeing the same issue areas they lobbied on in the two years before they were appointed. However, this executive order has been routinely ignored under the Trump’s administration. Bernhardt’s recusals started expiring in November 2017, when he was Interior Secretary Ryan Zinke’s top deputy. The final recusals expired in August 2019.

Industry groups’ belief in their ability to exert influence at the highest levels coincides with evidence that Bernhardt has consistently favored industry over conservation interests and public health.

For example, the New York Times reported in March 2019 that Bernhardt in August 2017 blocked the release of an analysis finding that two toxic pesticides, malathion and chlorpyrifos, would jeopardize hundreds of animals, fish and plants. In the fall of 2017, Bernhardt was actively involved in the agency’s work to issue an opinion on the potential effects of three pesticides on endangered species, going so far as to instruct the staff “to change its method for determining the potential effects,” according to an inspector general’s report on the pesticide issue published in December 2019.

That report revealed Bernhardt to be an aggressive, hands-on manager of the Interior Department’s pesticide policy process. Bernhardt told other Interior officials in an October 2017 e-mail that “I need to be updated” on the issue and requested detailed briefing materials. According to the inspector general’s report, Bernhardt was highly critical of the initial recommendation by career employees in the Interior Department’s U.S. Fish and Wildlife Service, calling it a “pathetic waste of energy, effort, and resources” because it was developed prior to consultation with the Interior Department’s solicitor’s office. That office is led by another political appointee, Daniel Jorjani, who has close ties to the oil and gas industry. The New York Times reported that Interior Department lawyers, echoing industry concerns, advocated for a narrower standard that would result in fewer plants and animals being deemed in danger of extinction due to pesticide use.

However, the inspector general concluded that Bernhardt’s involvement in this process “did not constitute a conflict of interest” or a violation of ethics regulations because Bernhardt’s former clients were not users of the pesticides in question. By contrast, the inspector general found in a separate report that another top Interior official,Douglas Domenech, violated a conflict of interest rule by accepting meetings with his former employer, the Texas Public Policy Foundation.

"Dracula in charge of the Blood Bank" is the cliche that springs to mind...
Nurse, where the fuck's my cardigan?
And my gin!
Top

Finally Dear Leader has put a stop to that nasty, uppity woman forcing schools in the US to provide healthy lunches. USA! USA! USA!


The Trump administration on Friday announced plans to roll back school lunch standards on vegetables and fruits originally promoted by Michelle Obama, unveiling the proposal on the former first lady's birthday.

The new standards will allow schools more flexibility "because they know their children best," the Agriculture Department said in a press release.

“Schools and school districts continue to tell us that there is still too much food waste and that more common-sense flexibility is needed to provide students nutritious and appetizing meals. We listened and now we’re getting to work,” Agriculture Secretary Sonny Perdue said in a statement.

The proposed rules build on previous steps taken by the Trump administration to unwind the controversial school lunch rules championed by Obama as part of her "Let’s Move!" healthy living campaign. Those rules were implemented through an executive order signed by former President Obama.

Under the new rules, schools would be allowed to reduce the number of fruits and vegetables required at each meal. The latest change follows a 2019 rollback of restrictions on milk and sodium content in school lunches.

Users browsing this forum: No registered users and 6 guests